In September 2012 TOGHS received one of several calls for help from the Five Points area in Toledo. We subsequently interviewed a man named Ian, who, along with his Wife Molly, reported numerous instances of paranormal activity in their turn of the century home. Molly stated that she was choked while in bed, pushed in the shower, and woke up one night to the sight of a young boy standing next to her bed. Ian had been hearing voices, including a child giggling, footsteps in the upstairs hall, and saw a shadow figure in two of the upstairs rooms. Several of the couple’s friends also witnessed this shadow figure and heard a child giggle; one man said he heard something whisper directly into his ear during a party in the basement.

After a several hour investigation, we had not captured any potential evidence nor had any personal experiences. As the evening was coming to an end, we decided we needed to take the investigation in a different direction. Our background research on the home revealed that a man in his mid-thirties named Jason had committed suicide in the home. We decided to target Jason, who was a disturbed man that abused drugs and had a criminal record that included stalking and domestic violence against women.

We thought that since Jason seemed like a bully when Molly was alone in the home, we should try and recreate a few of the scenarios that Molly had experienced in the house. That being said, we sent TOGHS member Becky back into the house with TOGHS Founder Butch as the sole cameraman. They began their first session in the bedroom where Molly had reported being choked. Becky began session one by laying in Molly’s bed asking if this was where he had choked Molly; within seconds of asking the question, the bed collapsed.

What was really strange was that two team members who weighed much more then Becky tried the same scenario earlier that evening without anything happening. In the second session, Becky along with Butch moved to the office which was under surveillance of the full spectrum camera. This is the room where the giggling was heard. Within a few minutes we captured the giggle on one of our digital recorders.

We concluded the evening with a third and final session in the bathroom where we attempted to recreate the shower incidents where molly had been pushed on several occasions. The session was setup with Becky in the shower. While standing in the shower with the water running. Becky addressed Jason with the question of whether he was the unseen entity that had pushed Molly on several occasions. And then asked him, why thought he had any right to abuse women? Again, within 60 seconds Jason had exposed himself in an aggressive manner in an EVP directed at Becky. (Why are you f*^#king him?

While we have no proof that it was Jason himself that we captured, he certainly fits the profile and the evidence we had documented that night. We have since been able to discern that the identity of the child in the home may have been a ten year old boy that died of pneumonia decades before.

Documented Class A EVP can be heard on our Evidence page 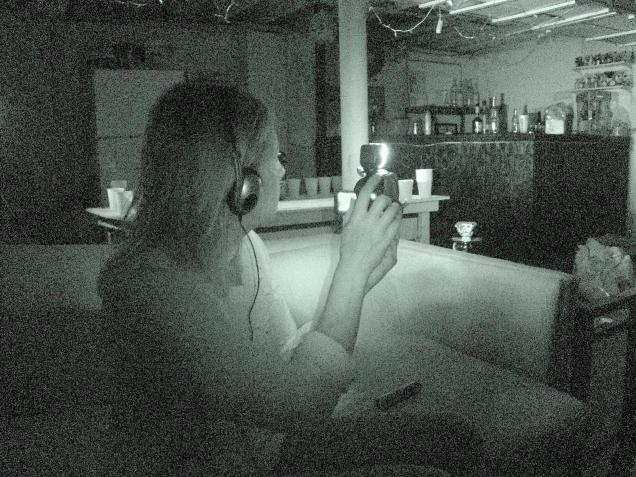 This entry was posted in Maxwell Haunting, Uncategorized. Bookmark the permalink.