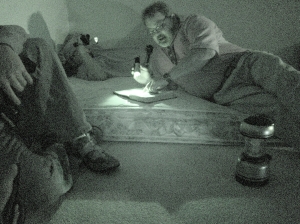 We are keeping the names private to protect the identity of our clients.  TOGHS received an email from a gentleman by the name Kevin West early this September. Kevin said he had a friend he works with named Pam who owned a townhouse here in Toledo that she bought in October 2007. She had lived there with her 27 year old Daughter Tiffany.

Kevin also informed us that Pam had moved out of the home in early 2008 due to poltergeist activity. The home is now sitting empty and in foreclosure. Neither electricity nor water.

Once we sat down and interviewed Kevin further we documented in our notes several reports of paranormal activity. Feelings of uneasiness, feelings of being watched, strange noises throughout the home at night. Tiffany claimed that one night her bed began to shake while lying in it, at the same time her wall calendar had falling off the wall, Dishes being moved from one side of the kitchen counter to the other, Curtains shaking without reason, They both reported to Kevin that the home would never get warm despite the thermostat set at 80 degrees. The activity continued to escalate to the extent that at one time Tiffany was outside and had seen a man standing in the window staring out at her. Pam at one time swept the carpeting then left the house only to come back and find footsteps in the upstairs bedroom carpet. They both had heard the voice of a man telling them to get out; this voice came from within the upstairs bathroom. Kevin then told us that Pam reported to him that she had been pushed and her Daughter Tiffany had been punched. They decided to move out.

Image Gallery after the fold.

Kevin decided to investigate the home himself at first, but after a couple visits to the home he decided to contact us. Kevin shared a few of his personal experiences with us while he was investigating the home. Kevin reported that he felt dizzy and lightheaded most of the time while in the home, He felt the presence of an unseen visitor in the same rooms he was investigating, At one time he set a bible on the floor in the master bedroom turned to the page Romans VI only to return later to find that the page had been torn and the bible moved. Butch and I decided to do a walk through of the property, while continuing to interview Kevin further. We stayed for about an hour and a half interviewing Kevin and visiting each room. We took 2 digital audio recorders, 2 digital cameras and 1 super 8 video camera to the residence with us. Once inside we began to document the visit from beginning to end. We immediately lost power on the video camera and could not film the interview. We let one audio recorder run throughout the interview and I carried the other with me during the interview and listened to all Kevin’s reported paranormal stories.

Once I finished the interview process, I thought I would run an EVP session in the upstairs master bedroom where everything was reported centered around. We felt nothing, nor did we pick up anything on camera or recorder during this first visit except the sound of running water on one of the audio recorders. Although I told Butch I felt the garage might have a little strange feeling to it. Kevin felt as though this must have been a poltergeist type with the information that he had received from Pam. We felt that there very well could have been a poltergeist in the home a year ago when the activity was happening but we didn’t think poltergeist would stay in an empty house for over a year waiting for the next victim or victims. Either way we decided to set an investigation date giving Marie enough time to visit our local library and get as much information on the home and it’s previous owners as possible.

TOGHS members Butch, Mike, Marie, Becky, Chris and I along with our newest member Gina arrived at the home on Friday September 18, 2009 around 8:00 in the evening. The temperature was in the mid 70’s and overcast. Our client Kevin was present to assist in anyway necessary. Once inside the home we set up 3 DVR video cameras, one in the master bedroom upstairs, another in the main bathroom on the second floor and another in the downstairs living room. We then set up a fourth night vision video camera in the Daughter’s bedroom were the shaking bed incident occurred. Butch thought it would be a good idea to set up one extra cassette recorder in the upstairs bathroom as well. We finished our opening prayers and immediately began our investigation. Chris started by recording temperature readings throughout the home while Butch took EMF readings. During the investigation Chris and Mike ran the two hand held video cameras and would follow each investigator documenting the entire investigation. During the first hour I took as many digital still photos as possible while Becky and Marie took turns recording their EVP sessions, Butch worked with Gina also recording EVP sessions.

Team member Marie that at one time previously there was a gentleman named William who lived in the home with his Wife Betty informed us, William had died the same year he had purchased the home. The obituary claimed that William had died in a local hospital rather then in the home itself, His Wife Betty died in a local hospital as well. We decided that after Marie’s researched did not find anything leading us to believe the property was haunted William and Betty may have been the cause for the activity. Although we would try and communicate with each and every tenant that lived in the home at one time or another. We continued to work in-groups recording our EVP sessions over the next couple of hours. We didn’t seem to pick anything up that seemed paranormal during these sessions and decided to work the three reported haunted hot spots individually. Becky would sit in the master bedroom while Marie took the Daughter’s bedroom and Gina took the upstairs bathroom. All three would be under video surveillance while communicating with the reported ghost or ghosts. This seemed to be a good idea because the entity seemed to pick on women mostly. We watched for any paranormal activity at the tech table during their session but didn’t capture anything out of the ordinary paranormally speaking.

Butch decided that after this session it would be a great idea to work the dowsing rods throughout the home, Becky and Gina accompanied Butch and worked the dowsing rods as well, Once returning to the tech table Becky claimed that she felt a little weird during her session but wasn’t sure if it was paranormal or just using the rods for the first time. Still nothing to report from the paranormal side. We then moved to Butch and Chris’s provoking sessions next. Mike would record the session on video while Becky and Gina would accompany them. They targeted William during this session but did not seem to provoke him into showing himself to them or the equipment. I think Butch ended the session as Gina was calling William a chicken Sh+t!. We were now into the early Saturday morning hours and would end the investigation with a group communication time in the upstairs spare bedroom. The whole group gathered around the room while we communicated with anybody that might be listening from the other side, With the knowledge that Kevin’s Bible page was torn days earlier we quoted from Romans VI. We did not seem to communicate with William or anyone that had lived or died in the home at any time during the investigation. Upon analyzing our recordings we have encountered several strange EVP’s and would like to share them with you.

The first EVP – Marie’s session in the spare bedroom, At the 12 second mark right after she says, Can you give us any kind of a sign? (Strange noise)